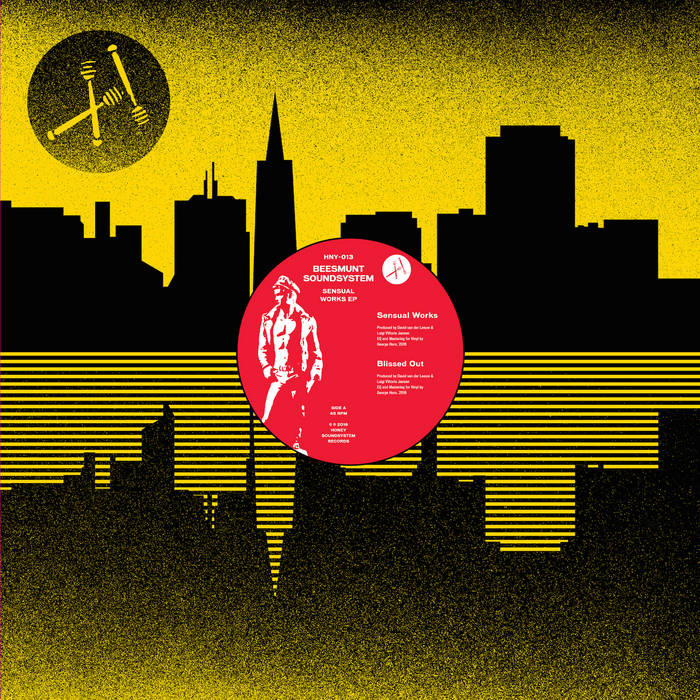 Honey Soundsystem Records (aka HNYTRX) is pleased to present its final twelve inch of 2016, the ‘Sensual Works’ EP by Beesmunt Soundsystem. Unbeknownst to each other, the Honey crew in San Francisco and the Beesmunt duo in Amsterdam have been brothers from another mother working away in their respective zones for years. A bit of internet sleuthing and the two entities found each other, perplexed by the similarities in namesake and good vibes. Before exchanging a single word, earlier this year David and Luigi of Beesmunt sent Honey some demos. They were a declaration of peace and understanding of sorts and both "sound systems" immediately fell into one. The three tracks romanced all the Honey sensibilities including references to San Francisco 80's Hi-HRG synths, early House drum machine workouts, and melodic lines you can make-out on a dancefloor to. To make the marriage official, Honey enlisted its own Jason Kendig to remix the A-side into a no-nonsense thumper with a heart of gold. We think these tunes are going to become as reliable on the dancefloor as the Sequential Circuits drum sounds and DX7 patches they employ. Whether it be ending sets with the euphoric “Blissed Out” or peak-time banging call and response of “Playin' Myself”, Honey finally shares its best kept secret weapons of the year with the eager public.

Childhood friends David van der Leeuw and Luigi Vittorio Jansen, both born and raised in Amsterdam in ’89, started operating as a DJ and Producer unit under the name of Beesmunt Soundsystem in the summer of ’08. Experimenting their way through a wide range of genres resulted in a unique and versatile approach in the DJ booth. Elevating crowds by carefully crafted selections ranging from House and Disco to Afro, Techno and everything in between earned them quality shows across Europe (Just Jack, ADE, Dekmantel, Corsica Studios), a residency at Trouw (R.I.P.) and their monthly show (BSS Radio) on Red Light Radio. Their progress in the realm of dance music also inspired them to advance and develop their own productions. By establishing a studio space in the centre of Amsterdam they gained a place to experiment and evolve. First releases soon followed, but it wasn’t until they teamed up with the Bristol based Just Jack label in ’14, that the boys started making some serious waves. The Baby Maker EP got ranked 4/5 by Resident Advisor and received great feedback and broad support, earning BSS their first UK tour and gigs/festivals across the rest of Europe. With the more experimental Body Shape & Raindance EP’s on Pets Recordings the boys slowly but surely continued their journey towards finding their signature sound. With three releases lined up for ’16, quality tour dates, and the continuation of their own ‘Soundmachine’ club night, David & Luigi are keeping the momentum going, while further demonstrating their versatility and infectious love of music.

Inspired by the electronic music emanating from Detroit's airwaves while coming of age, Jason Kendig has been immersed in the dance music community for over two decades. From his first residency at Detroit's infamous club Motor to his current residency at Chicago's highly lauded Smart Bar and as an integral member of Honey Soundsystem–a queer collective of musicians, artists and djs known for elevating nightlife in San Francisco and beyond–Jason never fails to make others move through his ability to reference dance music's past yet keeping an ear to the future.
"Kendig's own mixes have a deep, wintry atmosphere, sparkling with subtle details, ambient risks, and the refinement that comes from years of just listening to techno. He also has the ability to reinvest campy disco or house classics with the fervent emotions that informed them in the first place, bringing on the shivers with, say, a familiar acid-derived cymbal hit." - Marke Bieschke / XLR8R
"Kendig is the kind of DJ who makes the technicalities of mixing vinyl seem effortless. He picks his tracks quickly, he holds his blends for a long time, and he has this ability to ratchet up the intensity of his playing in a way that's very different from other local DJs..." - Derek Oppermen / SF Weekly

Honey Soundsystem is a San Francisco based collective of four. Jacob Sperber, Jason Kendig, Robert Yang and Josh Cheon came together inspired by pivotal gay underground parties and dance music history, who offered a take on dance music in direct opposition to what was blaring on mainstream club speakers. They bond over a shared love of timeless sounds, iconic imagery, the complete look, indulgent behavior, and most of all, attractive men. The boys dedicate time and passion into archivist work, which resulted in unearthing the lost gay porn soundtracks of San Francisco’s Hi-NRG producer Patrick Cowley released on Honey’s flagship HNYTRX and Cheon’s Dark Entries. The crew throws their heart into event production and are known to build massive, elaborate, party-specific installations. Honey boys have their fingers in the world of music production, remixing and DJing parties around the world.

Bandcamp Daily  your guide to the world of Bandcamp